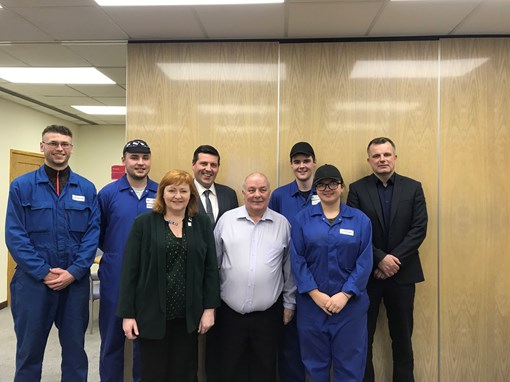 The DTF site at Dumfries, Scotland had a ministerial visit earlier this week when Jamie Hepburn, Minister for Business, Fair Work and Skills was accompanied by Emma Harper MSP for South Scotland visited the site and talked to young people who have been recruited from the Foundation, Modern and Graduate Apprenticeship schemes offered to schools throughout the region.

Ms Harper and the Minister met with four of the apprentices who have progressed in different ways in the ‘earn as you learn’ route which can enable young people to gain degree qualifications through an alternative pathway to university.

“I’m delighted that another Scottish Government Minister has visited Dumfries & Galloway to show a commitment to local communities, businesses and people. I was pleased to join the visit with the Minister for Business, Fair Work and Skills to DuPont Teijin Films”.

“It was great to be able to meet with the management, the staff and engage with the young people at DuPont Teijin Films. The work they are doing is an example of national good practice, and I wish them every success for the future”.

“The Foundation, Modern and Graduate Apprenticeships offer young people a fantastic pathway to success, to gain qualifications and earn while they learn in a real business environment. These young people working at DuPont Teijin Films, and the management team here who support them, are a fantastic example of how, given the choice at school, students can develop their potential.”

“We were pleased to welcome our visitors today in recognition of the success of our Apprenticeship schemes and the young people who are involved in them through the work that has been completed by ourselves and our partner agencies. The Apprenticeship route is an important and valuable part of our recruitment policy.”

“I had already been accepted onto a university course but I wanted to do something more hands on, more practical so the Graduate Apprenticeship opportunity at DuPont Teijin Films is perfect for me. I wanted to stay within Dumfries & Galloway but at the time university was the only route offered for me before these apprenticeships were offered through school.”

“I didn’t get a lot of qualifications at school but thanks to an opportunity with doing a Modern Apprenticeship I’m now at DuPont Teijin Films where I earn while I learn and I’m now in my second year at Strathclyde University which I attend once a week. I would never have considered being able to get a degree whilst I was at school”.

DuPont Teijin Films (UK) Ltd works closely with Scottish Enterprise and Dumfries & Galloway College to recruit and develop apprenticeships which provide one of the routes for recruitment for the global business.