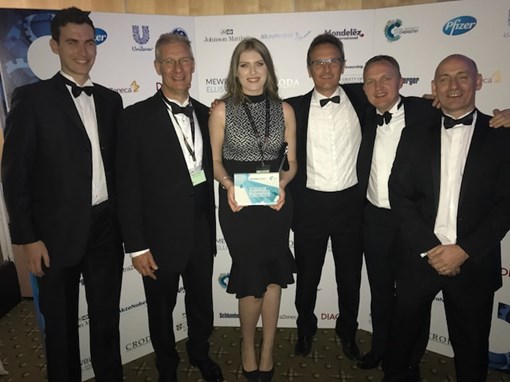 Megan Todd, DuPont Teijin Films (DTF) Junior Experimental Scientist, and Teesside Chemistry student has won the UK Royal Society of Chemistry Industry Technician of the Year Award 2017, at a ceremony on the evening of 13th June at The Midland Hotel, Manchester, hosted by BBC TV and radio presenter Maggie Philbin.

Megan works at the Global Research and Development Centre of DuPont Teijin Films (DTF) at Wilton, Redcar, where she helps develop new polyester polymers and films, intended for customers around the world. Megan joined DTF straight after her "A" levels in 2013 under an apprentice scheme and is currently on day release to Teesside university, where she studies chemistry.

On being nominated and winning the award Megan said ' I felt extremely honoured to have been considered for the award from such a prestigious society. Attending the Chemistry Means Business event and finding out that I had won was an amazing experience and a wonderful evening. To win the award early in my career is exciting as I believe it will benefit me greatly in the future. I'm so happy I managed to win this award and can hopefully show other young people you can achieve anything when you put your mind to it.'

Dr Stephen Sankey, DTF Business Research Associate said "Megan has proved to be a very capable and enthusiastic member of the team at Wilton and her friendly approach to her colleagues combined with her dedication and high standards of work will ensure that Megan will no doubt progress further within the company over the coming years. Megan has played an important role in the last two years in the development of our PET Mylar films intended for lamination to Aluminium cans."

The award winners, who all work for companies in the chemistry-using industry, are chosen by a panel of senior scientists and industry executives and selected for their contribution to innovation and commercial success.

Aurora Antemir, Head of Industry at the Royal Society of Chemistry said:
“The chemical sciences industry makes an enormous contribution to society worldwide, bringing value to the economy, and improving everyday lives.”

“As the professional body for chemists, it is a pleasure and an honour to recognise the outstanding achievements and inspirational stories of chemical scientists from across the industrial sector, from apprentices to CEOs.”

The awards represent the breadth of the chemistry-using industry, with winners coming from start-ups and small companies as well as major multinationals, and working in a range of areas from pharmaceuticals to energy.