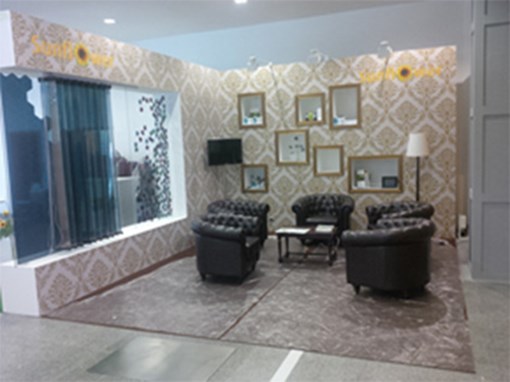 Muttenz (CH), 15 June 2016 - Since 2012, partners in the European Sunflower project have made some significant breakthroughs to facilitate industrial use of OPV (printed organic photovoltaics). They have taken the materials used and improved their lifespan and performance, with production costs likely to appeal to businesses. Their achievement was acknowledged when the demonstrator that they designed won an award at LOPE-C in Munich this year.

The 17 scientific and industrial partners involved in the Sunflower project, whose research is aimed at developing printed organic photovoltaics, chose a living room as the setting in which to showcase their work. The room looks a bit old-fashioned at first glance but the attentive observer will soon notice the discreet technological presence, such as the window blinds with integrated printed organic PV modules or the OPV handbag left on the armchair. It is an original way of demonstrating the breakthroughs made and was awarded the 'Best Publicly Funded Demonstrator' prize at LOPE-C, the world's biggest printed electronics trade fair and conference.

Large-scale roll-to-roll printing on flexible polymers: this is one way of describing OPV technology which has shown great potential for a number of years now, especially in applications where aesthetics are important, such as on building façades or when incorporated in everyday objects. Nonetheless, the PV performance and lifespan still had to be improved. Now, the project's industrial and scientific partners have developed new materials that are fully compatible with the technology, promising much lower production costs than rival solutions. In the laboratory, the energy efficiency from OPV cells has reached up to 10%.

OPV will help the European Union hit its energy targets

"The possible applications for OPV technology are numerous, from consumer mobile electronic devices to architecture," explains Giovanni Nisato, coordinator of the project managed by CSEM (Swiss Center for Electronics and Microtechnology). "Thanks to the results we have obtained, printed organic photovoltaics are set to become part of our everyday lives, letting us use renewable energy which is respectful of the environment and with a positive impact on our quality of life." The European Union has invested €10 million in this project, enabling much progress in OPV materials, science and device technologies, which will help it achieve its goal of doubling the share of renewables in its energy mix, from 14% in 2012 to 27-30% by 2030. Sunflower has paved the way to enable a significant rise in the use of solar power incorporated into everyday objects.

SUNFLOWER OPV sunblind and window at the ICT 2015 Event in Lisbon, Portugal.