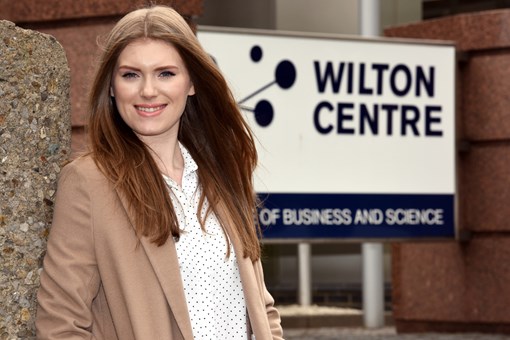 One of DuPont Teijin Films Chemistry students Megan Todd has been nominated for a national award in recognition of her work.

Megan, 21, from Ingleby Barwick, has been shortlisted for the Royal Society of Chemistry Science Industry Technician of the Year award which recognises outstanding contribution made by an individual in a technical role in industry

The BSc (Hons) Chemistry student is completing the degree part-time at Teesside University while working as a junior experimental scientist along with technician roles for DuPont Teijin Films at the Wilton Centre near Redcar.

Megan said: "I completed an apprenticeship and my employer allows me to go to Teesside University one day each week.

"I am really pleased to be nominated for this national award, especially as I am just one of four people shortlisted. It is also lovely to be recognised for the hard work and enthusiasm I put into my job and university studies. I'm sure the nomination is due to my work at the company and extra contribution in promoting of the apprenticeship scheme."

Megan was nominated for the award after meeting Nelly Harvey of the Royal Society of Chemistry when the TTE Young Scientist programme was accredited by the RSC for Registered Scientist status. The programme incorporates the first two years of the part-time degree,

"I was at a meeting with Nelly to represent the student point of view and spoke to her for around an hour. It's lovely to think that I made such an impression that she suggested me to be nominated for the award."

Chemistry degree courses offered by the University's School of Science & Engineering have recently been accredited by the Royal Society of Chemistry. The Society's committee for accreditation and validation also praised the analytical chemistry provision, laboratory infrastructure and equipment.

Megan said: "I chose to come to Teesside University as it was local to me and also the opportunity to study while working was an opportunity too good to miss.

"Teesside University is in a great location close to so much industry and it's good to be able to study and follow my chosen career in the region where I live. When I graduate I will have five years of work experience. It's been fantastic to be able to learn while I earn, putting what I'm taught immediately into practice at work."

The awards will be announced in London on June 15.