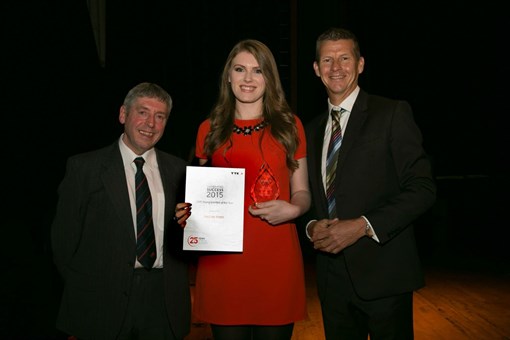 Teesside University student and DuPont Teijin Films Experimental Scientist Megan Todd had reason to celebrate recently when she picked up Young Scientist of the Year Award at the TTE Celebrating Success 2015 awards which was held at Middlesbrough Town Hall, highlighting the achievements of its current Study Programme students and employer-sponsored Apprentices.

Guest of Honour at the event was Olympic Silver Medallist at the BBC's Athletics presenter, Steve Cram CBE, who gave an inspiring motivational speech about his career to the guests in attendance, which included students and their families, representatives from colleges, sponsoring employers, local and international industry and members of the North East business community.

Megan, who studies part time BSc Chemistry at Teesside University, has been working at DuPont Teijin Films in Wilton Centre for 2 years.  Megan was also recently given the position of deputy LSS (Lab Safety Supervisor) to one of the main labs, giving her more responsibility in the work place and broadening her role. "I carry out a large amount of testing for my project and team and I am the custodian of some lab equipment. I run samples for colleagues throughout the business. I also run our small scale polymer production rig as one of only two trained members of staff on this equipment" she said, "I love that I am gaining so much experience from the people I work with alongside the chemistry degree, I am given a lot of responsibility and treated as a valued member of staff,  I have been very lucky to have this job and privileged to be in the position I am in" she continued.

For the future Megan would like to progress in her current role at DuPont Teijin Films enjoying working on a variation of projects which she said makes the job very interesting.

On winning the award Megan said "Winning this award means a great deal to me, I try my hardest to be a good employee as well as gaining good grades at university. I am grateful that people have noticed my hard work and nominated for me to win this award.  It feels brilliant to be noticed for my hard work and will continue with the same mentality. I am extremely grateful to everyone who has helped me get to this point in DTF.

The celebrations were completed by a party in the Town Hall Crypt with live music from local band, The Graft, which includes former TTE apprentice, Peter Haley.